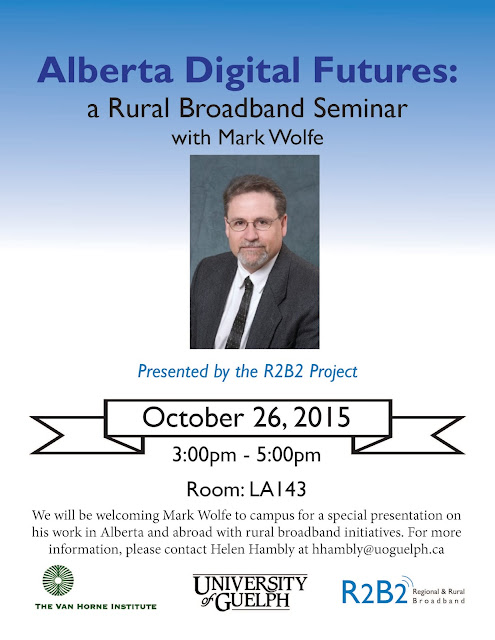 On October 26 we will be welcoming Mark Wolfe to the University of Guelph campus for a special presentation on his work in Alberta with rural broadband initiatives. He will be coming fresh from the Van Horne Institutes’ Digital Futures Symposium on Rural Broadband Enablement in Olds, Alberta. He will provide insights into rural broadband initiatives in Alberta, as well as his application PLANTI and his other work in Germany.

In preparation of his visit, we have interviewed him about his current project. It is a mobile application currently called PLANTI that he has been developing. Check out the interview below to find out more about PLANTI!

What can you tell us about your latest project titled PLANTI?
PLANTI – derives from Esperanto, but also stands for Photo-based Logistics for Agricultural Network Technology Interaction

What led you to embark on this project?
Pure serendipity — my Airbnb host in Berlin this past March turned out to be a partner in this start-up venture. When we began comparing notes just conversationally, the overlap between their interests and my background in rural broadband enablement in Alberta and Canada was a bit freaky but also an immediate fit. I was introduced to the partners right away and we agreed to work on a North American angle, starting with SME ag producers in Canada as a test market.
What is the premise or framework?
The mobile app will use gamification technology to simplify and streamline the supply chain for local small and medium sized producers, distributors and purchasers. Using the smart phone to geo-tag photo records of products and shipment specifics build in record keeping while “putting a face to the food” – thereby encouraging transparency and enduring trust relationships. Financial transactions are also built in, recorded and tracked, thereby streamlining the payment process as well.Intended purpose?
The primary purpose of the app is to substantially increase the overall efficiency of the producer-consumer value chain, thereby reducing food wastage and improving the economics for small/medium producers and retail consumers.

What’s the eventual format and how will it function?
Still in development; hopefully I’ll have more on this by the time I come to Guelph.

What challenges do you expect in the uptake process of this app?
Part of my role is to design and oversee testing of the application, which will probably happen in Hungary as a first pilot project. This will involve in-depth qualitative analysis of end-user interaction with the technology

To whom will this app be most beneficial to? What are those benefits?
Smaller producers, especially those moving smaller amounts of produce into the wholesale and direct sale system. Greater and more timely movement of food volumes will cut waste, thereby increasing profits and long-term farmer and supply chain sustainability. In that sense, the app also has potential application in the urban agricultural and community gardening movements.

What development processes are you incorporating prior to widespread release?
The app itself is in coding and pre-testing, with farmers’ market testing being done; concurrently, the qualitative research design

Is this app viable on a global scale or is aimed at certain regions? What impact is PLANTI anticipated to have on supply chains and food systems?
The app has direct relevance to those jurisdictions, such as Eastern Europe, where the supply chain is still rooted in a smaller producer ecosystem. In Hungary, for example, more than 500,000 farms are 4 hectares or less in size. That’s a huge market dying for efficiency. But in principle the app is also scalable and could have a role in precision agriculture domains as well where likewise distribution systems could use some fine tuning.

How does the importance of rural broadband access relate to PLANTI?
The app depends on robust wireless broadband, which of course is typically under girded by fibre infrastructure.